A committee of 22 leading scientists and doctors just voted 17 to 4, with one abstention, encouraging the US Food and Drug Administration to grant emergency use authorization for Pfizer’s COVID-19 vaccine in the US.

Their vote is not a final verdict, it’s really just advice.

Ultimately, it’s up to the scientists working inside the FDA to decide whether or not to approve the two-dose vaccine candidate for an emergency OK. That decision could come just minutes, hours, or days from now. 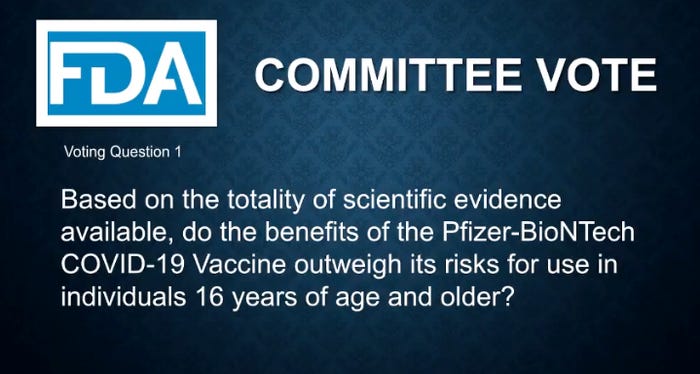 “Our plan is to take their recommendations into account for our decision making, and make a decision shortly thereafter,” FDA Commissioner Stephen Hahn said Thursday morning on TODAY. “We intend to act quickly.”

Hahn has already indicated that he is near-ready to give the green light for the Pfizer vaccine, though.

“Our initial assessment is that this is a vaccine that does meet our criteria,” he said on TODAY.

Pfizer’s vaccine has already been OK’d for emergency use in the UK, Canada, and Bahrain. The New York-based drugmaker and its German partner, BioNTech, said in November the shot was 95% effective at preventing symptomatic COVID-19 in a massive clinical trial.

The FDA convened an independent expert panel Thursday to weigh in on Pfizer’s application. The group included some of the top virologists and medical experts in the nation, including Dr. Eric Rubin, an infectious-disease specialist and editor-in-chief of The New England Journal of Medicine, and Dr. Paul Offit, a top vaccine expert at the University of Pennsylvania who co-invented the rotavirus vaccine. 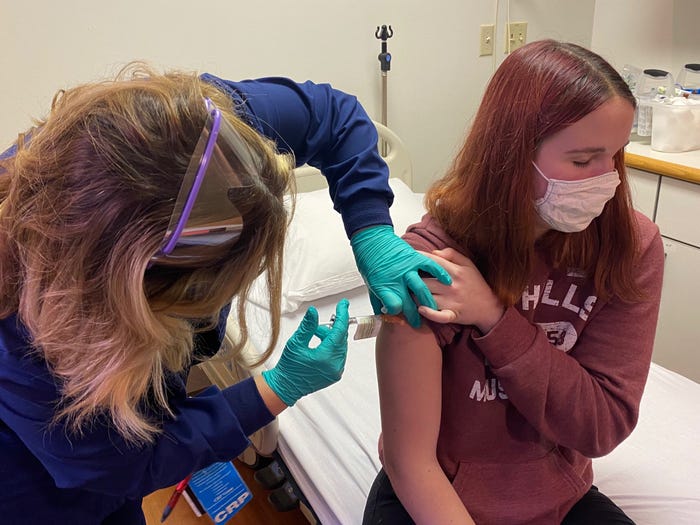 In a virtual meeting hosted on Adobe Connect, and punctuated by many mute and WiFi issues, committee members listened to hours of presentations and debated lightly at the end of the day.

Before the vote, there was some debate among experts about whether or not there was enough data to support OK’ing the vaccine for 16- and 17-year-olds, who were included in the wording of the FDA’s voting question. No one under the age of 18 got sick with COVID-19 during the trial. Some on the committee expressed a desire to increase the minimum vaccination age to 18.

The exact reasons four members voted “no” were unclear, though. The group adjourned promptly, leaving no time for members to explain why they voted the way they did.

Throughout the meeting, no panel member expressed substantive doubts about the overall merits of the vaccine, particularly in the benefits it could provide to the most vulnerable Americans that will be prioritized.

The largest vaccination campaign in US history is around the corner 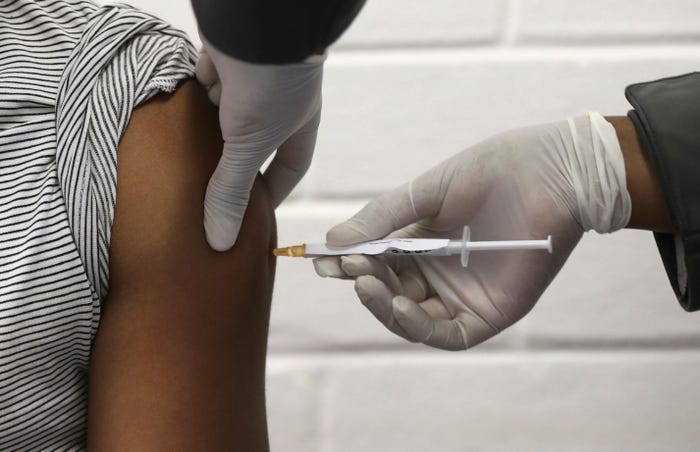 If and when the FDA does allow Pfizer’s shot to be used, that would kick off the largest vaccination campaign in the history of the US.

Operation Warp Speed, the federal government’s vaccine initiative, plans to start shipping doses to states within 24 hours of authorization. Warp Speed officials said 2.9 million doses of Pfizer’s vaccine will be sent out in an initial shipment.

The Centers for Disease Control and Prevention has suggested that healthcare workers and nursing home residents, both groups who’ve been hard-hit by the pandemic, should be first in line. That’s just a recommendation, however, and states are free to decide how they want to allocate their vaccine supply.

The vaccine authorization couldn’t come at a more critical time, as the number of COVID-19 deaths per day in the US just surpassed 3,000 for the first time.

“We have been looking forward to presenting our robust data package to the committee of vaccine experts for the U.S. government since we began our efforts to develop a novel COVID-19 vaccine earlier this year,” Pfizer CEO Albert Bourla said in a statement. “We are pleased with the vote, and if the FDA issues an authorization, stand at the ready to bring this vaccine to people in the US in an effort to help combat this devastating pandemic.”

Additional help is on the way. The FDA is also reviewing another coronavirus vaccine developed by the Massachusetts biotech Moderna. The agency is planning to have another advisory committee meeting next Thursday to discuss that application. Moderna has said its two-dose vaccine was 94% effective at preventing COVID-19 in a late-stage clinical trial.

Warp Speed officials have estimated 20 million Americans could begin the vaccination process before the end of 2020, based on supply estimates for Pfizer’s and Moderna’s shots. Moncef Slaoui, the chief advisor for Warp Speed, has also projected 30 million more Americans will be immunized in January, and 50 million more in February.

The Top Fitness Advice for 2021 from World-Class Athletes

Elite Agent: Can Aneesa Get Her First Problem Win